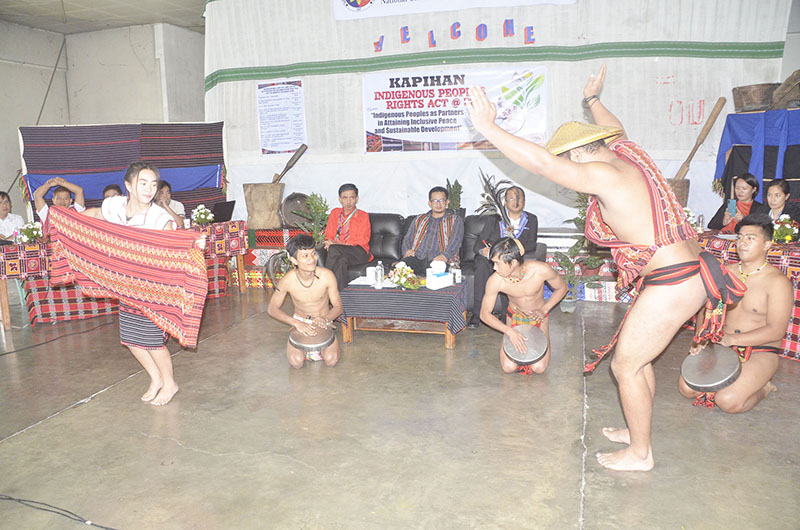 NCIP-CAR Regional Director Roland Calde affirmed a sound climate for Cordillera Indigenous Peoples in terms of education and socioeconomic standings. Calde led other officials of the Cordillera RDC Committee on IP Concern in a Kapihan media forum in Baguio City last September 30 for the launching of the scheduled events and activities for the month long celebration of the 22nd Indigenous Peoples Rights Act anniversary with the theme "IP as Partners in Attaining Inclusive Peace and Sustainable Development". CCD/PIA CAR)

BAGUIO CITY – In celebration of the 22nd Indigenous Peoples (IP) Month with the theme “IPs as partners in attaining inclusive peace and sustainable development,” NCIP-CAR taps its very own IP student scholars under its Educational Assistant Program (EAP) to plant fruit bearing trees within their respective ancestral domains.
The activity is dubbed as “Cordillera IP youth agroforestry and ancestral domain ecology drive,” a of NCIP – CAR to make NCIP EAP scholars/grantees undertake their social and environmental responsibilities towards the stewardship of their ancestral domains. “Apart from providing financial aid to our NCIP EAP scholars/grantees, NCIP is also mindful of equipping our IP youth with the indigenous values regarding ancestral domain stewardship”, said NCIP – CAR Regional Director, Atty. Roland P. Calde.
Calde further reiterated that attached to being a NCIP EAP scholar/grantee, are the duties and responsibilities which will be borne by the student. “This way, it will also prompt NCIP EAP scholars/grantees studying in the City of Baguio to return to their respective domains and apply or share their acquired knowledge with their fellow IP/ICCs”, said Calde.
“We hope to instill in the minds of our NCIP EAP scholars/grantees that they should be future administrators and vanguards of the ancestral domains, and keepers of indigenous values that helped shape the Cordillera. In turn, they will pass these on to their children”, added Calde.
Calde also disclosed that NCIP–CAR has started distributing fruit bearing seedlings to NCIP EAP scholars/grantees earlier this month. NCIP EAP scholars/grantees were instructed to secure their fruit bearing trees from the nearest NCIP Provincial Offices or Community Service Centers. Likewise, they were encouraged to plant these within their ancestral domains.
Apart from embracing their duties and responsibilities as stewards of the Ancestral Domains, NCIP EAP scholars/grantees, who are mostly millennials and are very much influenced by modern and popular culture, must relive the age-old indigenous values and culture of collectivity. “Fruits of the planted trees will be reaped by the ancestral domain owners and will be communally enjoyed by them”, said Calde.
Meanwhile, NCIP EAP scholars/grantees will be joining the cultural parade on October 11, 2019 along with other government agencies during the culminating activity of CAR’s 22nd IP month celebration. The parade will start at Malcom Square. The delegation will then march going up Session Road to PFVR gym for the program proper. Recently installed NCIP Chairman Allen Capuyan will be gracing the affair as the program’s keynote speaker.
October was the same month when the landmark legislation, Indigenous Peoples Rights Act (IPRA), was enacted. It was supplemented by “Presidential Proclamation No. 1906, s. 2009 declaring the Month of October of Every Year as National Indigenous Peoples Month” and “Presidential Proclamation No. 486 declaring October 29 and Every Year Thereafter as National Indigenous Peoples Thanksgiving Day” ** Rocky Ngalob